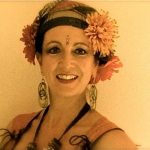 A warm welcome from Deirdre’s Dance Den, bringing you stories from our dance community around the globe! Yes, Gypsy Caravan Tribal Bellydance™ has gone global and is welcoming new dancers and followers all the time.

I love hearing your stories and particularly those that illustrate resilience, strength and how the dance and the dance community are welcoming and supportive.

Sarah, from Cairns in Australia writes:

“Although my dance journey only began fifteen months ago it has become an inseparable part of a longer personal journey that I began almost six years ago. That journey has been one of personal tragedy and triumph and of complete gender transition. I was born male and lived in that role for forty eight years. While I was happily married and raised four children, I lived the identity imposed on me by society. The woman in me would not be silent. In 2008, I began the most important journey of my life. I lost so much, not least my family, but I gained much more. My own identity and a sense of peace I had never known.

My gender transition was completed in February 2012 in Chonburi, Thailand. An extraordinarily gifted surgeon fixed the physical and I was reborn. I began a twelve month recovery process at the end of which I was ready to face the world again. What I had been through left me very isolated.  Society is not very accepting of people in transition but I decided to break out.

In April 2013, I decided to fulfill a lifetime dream and learn to dance.

A friend in the UK was dancing tribal style, I thought, why not. I began a search for local tribal groups. The first on the list was Tribal Zest here in Cairns. I made contact and received a phone call the next day. Sienna, who ran and taught Tribal Zest explained that she had never met a transgendered woman let alone taught one but was very willing to give it a go.

Two weeks later I attended my first lesson. In the fifteen months that followed I have enjoyed every second of dancing. I have been a little slow to learn due to hips and muscles designed differently to other women but which I am slowly training to be a little more flexible.

Some of my motivation to dance was to learn how to carry myself in a more feminine way, to improve my posture and hopefully learn a little grace. I must admit I felt like a large, uncoordinated lump when I first started. I no longer feel like that.

Tribal has allowed me to really connect with me, to know me, and to express my femininity without conscious thought.

I have been able to, through dance, connect with my tribal sisters on a level I never thought possible. Their unconditional acceptance of me has been remarkable and has enabled me to fulfill a dream and grow as a woman.

The highlight so far in my dance journey was just the other weekend when Tribal Zest appeared in the Cairns Festival Parade.  I was asked to join the girls on the float. The thought absolutely terrified me.

The last thing a woman like me wants to be is where people can abuse, taunt, or ridicule. I found the courage and joined the girls on the float. It really was the first time I had ‘put myself out there’. I need not have worried.

I had a wonderful time and my self confidence has risen to a new level.”

Share with us! We look forward to hearing from you.

Yours in dance, and best wishes,
Deirdre

And Paulette adds,  “Wow, what a courageous, beautiful, life-fulfilling journey, Sarah, thank you for sharing, for standing up in your own power and beauty, and for your dance!”