Pretty excited about my 2nd article in Tattoo Road Trip!

below are more photos and the whole story!

Glamping on the Road

I’ve been on many adventures this last month, in my little T@B camper, and also in my new/old ’63 Shasta trailer—glamping is the appropriate term here, glamour camping! And what wonderful and colorful people I am honored to meet while traveling.

Since last month’s article for Tattoo Road Trip, I had my first solo maiden voyage (meaning no husband Jeff) pulling the T@B driving from Clatskanie, OR to Spokane, WA, a long trip of about 8 hours. Driving a small trailer like this, only 1000 pounds, is not too difficult, but in super windy conditions like in the gorge, going slower is a must, and no quick lane changes! With only a little white knuckle driving on a steep cliff or two, yes, there was a few moments of panic as I don’t like driving on the edge, but dang it, I did it! Cheers to me for that. And after hitting Prosser, hooked up with other gals and their trailers, so we were able to caravan and what a sight driving along on the freeway!

Absolutely gorgeous country western Washington is—rolling wheat fields, open sky, curving hills—with the sun shining brightly, I was a happy camper driving on this route to my first glampout with Sisters on the Fly, the main purpose of this journey. SOTF is a crazy group of women who have trailers, mostly vintage, and fixed up to the nth degree, wow. Trailers like Aladdins, Airstreams, a Scotty, with cowboy/girl and fishing themes prevailing, and we are talking some mighty fine girly campers and trailers—pinks, lace, aprons, cowboy boots, fishing rods, flower pots, crinolines and tuttus, hats, jewelry, and lots of wine! These women know how to camp. And I am proud to say I am Sister #1757. There are almost 2000 of us now, is that wild?

One of my camping mates, Jennel, drove an old pickup pulling her cowgirl themed Aladdin trailer, also her maiden voyage. She had her two small pups which made the whole camp happy because they were so happy to be with all of us. Jennel was a hoot, and awfully damn cute in her red crinoline with her cowboy hat and tatts showing. 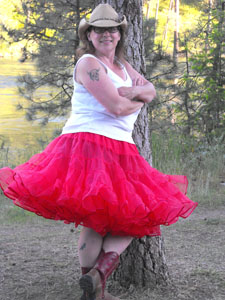 I also had the pleasure of meeting my other camping mate, Rene’s, parents when they came to visit the campground early Saturday morning—Sarah and John, of Cherokee descent. I immediately felt the love from these two magnificent people, and the wisdom of their spirituality. Out from John’s sleeve peeked a small and faded tattoo, a symbol of sorts, of which I had to find out more about. It was tattooed in the colors of the four directions. John told me that in their belief, there are four great supernaturals, and the magic number four being the most sacred. In the Lakota way it stands for Tatuye Topa, the four quarters of the earth. One of the Lakota’s chief symbols is Umane, and John gladly told me the story of this Lakota symbol. Umane represents the power that we all have, as the part of the force left over, or the unused force, after the Maker has made all other things upon Mother Earth—both animate and inanimate—the rocks, trees, grass, 4-leggeds, and 2-leggeds.

The configuration of John’s tattoo was his desire to use the Uname symbol plus the four directional colors. He told me that there remain about five different variations of the colors. The scheme he used is red for east, yellow for south, black for west, and white for north. 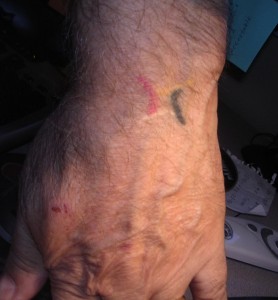 I could have listened to John talk for hours, but we had campers to visit and trailers to check out, as well as the gigantic and crazy Farm Chicks vintage sale going on at the Spokane Fairgrounds, another reason for the Sisters campout.

The whole weekend was a blast, I laughed til I cried, played a little guitar, cooked vegetarian delights for my camping mates, drank wine, and was completely relaxed and inspired through the whole weekend. I made it home safely and with more courage and skill at pulling my trailer, but avoided the roads with cliffs!

You could say that Jeff and I have gotten a little trailer obsessed. After that weekend we drove down to Klamath Falls, about six hours south of us in south eastern Oregon, to pick up our new/old ’63 turquoise and white Shasta, refurbished, and with wings! Heaven…just what we had been looking for- a bit of history, and a classic. We drove through the mountains and enjoyed the ever changing scenery, which included rain, hail, snow, sun, wind, high desert, tall mountains, big lakes—stunning. A short and sweet visit with the talented Wendy Durighello, from the Tin Inn, who refurbished our trailer (www.tininntraveltrailers.com/), and we were on our way home, towing our new beauty. 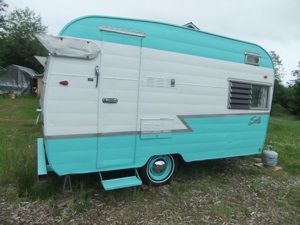 The obsession took us on our next journey to the beautiful hills and mountains of Rosyln, Washington. Yep, that is where the fabulous TV show, Northern Exposure, was filmed. We drove that distance this time for the 2nd Annual Vintage Trailer Rally. But first, we had to make a pit stop at Dick’s Brewery in Centralia, WA, to do some taste testing, as we carry their beers in our shop, Cultivator General Store. A sunny and hot afternoon, we sat outside talking with the brew masters sipping on a cold Dick’s Danger Ale. Parker and his partner had good beer info to share and a tattoo to show. Score…And the beer was mighty fine too. We could have stayed and chatted and drank more beer, but only one beer allowed and time to hit the road again. 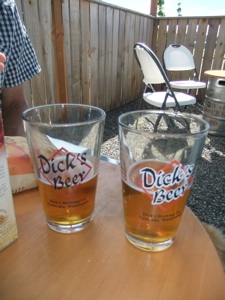 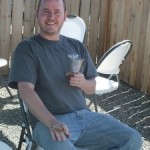 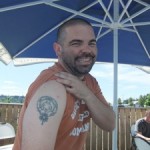 Up and over the Snowqualmie mountain pass over highway 90, we pulled into Roslyn later than expected, but it was still light out, and lordy, we looked at the trailers already lined up! Adrenalin pumping as we made our way into the park and found a site to rest our Shasta, before tearing up the turf to meet everyone and see all the trailers before darkness won out. And wow, let me tell you, about 30 of the coolest vintage trailers and cars were set up already, with more pulling in continuously over the weekend. 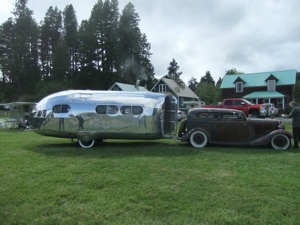 a 1966 Chrysler pulling a small Airstream 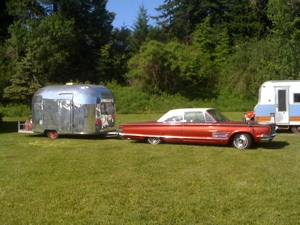 about eight 50’s and 60’s Aloha’s, several Shasta’s similar to ours, an Oasis, some Aladdin’s, a Silver Streak, Fireball, and more, oh my… some stock, some fixed up, some Sisters on the Fly gals were there too. Jeff and I were drooling over these beauties as we made the rounds, meeting new friends, chatting up each other for trailer info and advice, while sipping wines, and hanging out with our two camping corgis! 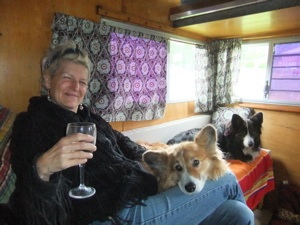 No matter the dark of night, generators buzzed, candles were lit, and firepits were fired up as campers milled about. And after a few rounds, we headed into the little town for some eats, starting at the Brick (again, the bar from Northern Exposure, where is Holling and Chris in the Morning?).

Roslyn is the cutest little town, and the town next to it also, Cle Elum, both with some nice cafes, a brewery, restaurants, art galleries, lots of horses in the rolling fields, gorgeous open land.

And what about this wheelbarrow art? How many high can you go? We slammed to a halt passing this site, and I had to get out, have a good laugh, and take some shots. 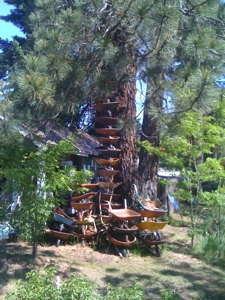 On Saturday, we were wind whipped and everyone wore layers of clothes so it was hard to see any ink. But Sunday morning, the sun was shining, the field of trailers was glorious in it’s multi colored metal collections! Our trailer neighbors, Margie and Terry Buckendorf, were in their sweet little Airstream, and yes, there was a tattoo on her wrist—a lotus blossom—which to her represents transformation, and growth, as in “roots in the muck, blossom in the light”. I think that is a lovely expression, one to keep you grounded, yet growing, stable and creative. Gotta love it. 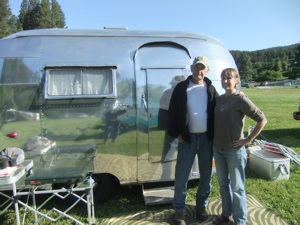 Stanley and Jeff talked incessantly about Shastas, as Stanley had a similar trailer! 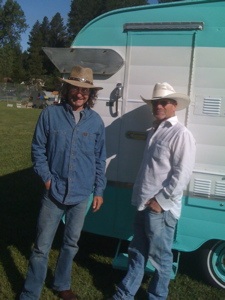 Inspired, ready to decorate and ready to roll, chatting it up with other trailer travelers, it was an amazing weekend.

Roslyn also has a sweet farmer’s market on Sunday morning and I had to hit up the local cheesemakers as I’m always on the lookout for good cheeses for the shop. Bought one of my favorite cheeses, Halloumi, from Tieton Farm and Creamery (Yakima, WA). Have you ever grilled Halloumi, and then sprinkled it with capers and lemon juice? That is exactly what we did when we got home, and their cheese was so fresh and delectable.

And it is always great to get back home to my other 2 dogs, Bella and Amboy, big Maremmas (Italian sheep dogs) who guard the goats and the chickens on our farm. Can you imagine them in our little camper? Not going to happen. 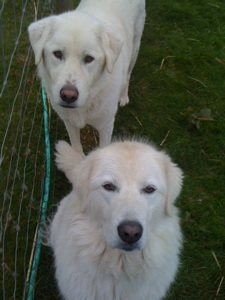 And now time to get my hair done by the amazingly talented Molly at Visions of Hair. 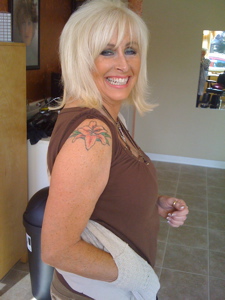 What happens when you get a bunch of gals in crinolines? They have to kick up their heels

and shake their booties a bit!

← Collective Soul and Teacher Training certification in Oregon!
Birthday Book Bash–Tribal Vision on sale for you… →