Home » The Quest Blog — has moved! http://www.paulettereesdenis.com/blog/ » Friday: What I Am Loving » the Adventures of Farmgirrrl Paulette

More on the farmgirl side of the tracks!

My strawberries are glorious, a bit later up here than in town, but so big and ripe and red and yummy! 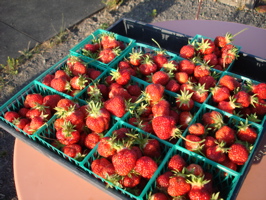 I sold my first pints to some dancers, thanks gals for supporting mama paulette’s crazy notion of trying to be an organic farmer! yea…. and my kale is taking over the garden, beautiful red russian kale. just stir fry it up with some garlic, and oh yea….

the Farmgirrrl Divas had two fun gatherings! We all wore aprons, and wait until you see the “man” apron that Darby’s daughter made! we discussed farmgirrrl logos, and upcoming gathering ideas, we were successful at making our 30 minute mozzarella! Yea. Thanks to all who stirred and dunked and read the recipe, (how many farmgirrrls does it take…?)

We sipped wine, ate tons of food, visited my animals, and swirled my poi fans in the setting sun. 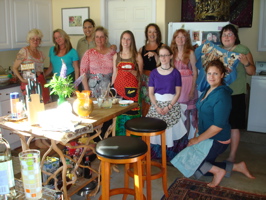 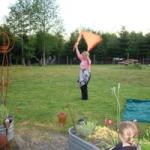 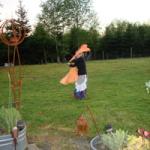 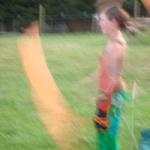 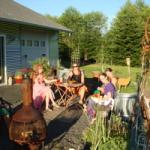 at the last gathering, a smaller one, us four farmgirrrls nibbled on veggie rolls,hummus, chilled asparagus, sipped on Kim’s homemade blackberry vodka, while I made strawberry rhubarb crumble, Karen made two wheat-free pies—chocolate cream with strawberries, and cheesecake with strawberries—and Kim made chocolate fondue for dipping fruit! It was a berry theme obviously, and quite tasty! 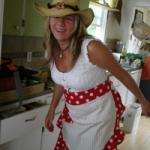 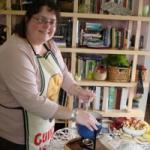 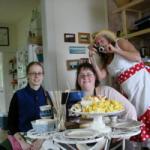 My new goaties, Gimli, and Sully, and chicks, eight of them, are doing great, the big chooks are running around in the garden, the coop—Coop DeVilla— is done and fabulous, and my man Jeff is starting work on the new pole barn with a loft for my writing and fiber art making…We’ve got some new farmgirrrl interest. We’ll see what’s next! 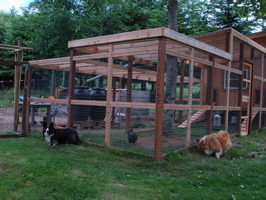 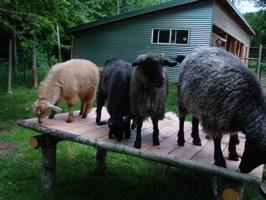 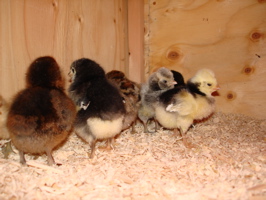 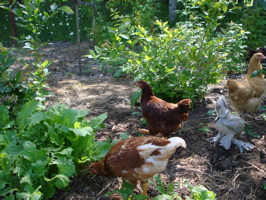