Home » The Quest Blog — has moved! http://www.paulettereesdenis.com/blog/ » Wednesday: Thoughts and Quotes » Wednesday thoughts and quotes: A legend…live your legend…

What must it be like to be a legend, living or dead? Of course, dead, you would never know…but living, well, that is now…

I saw Merle Haggard perform in the Snoqualmie Casino the other night. My brother said to me when I told him I was going, “Merle, is he still alive? You know Doc Watson died the other day.”  (Another legend gone…) 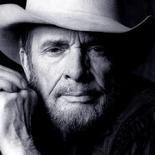 Well, yes Merle is still alive, and kicking, to use an old cliché.  I guess I should say his is still strumming, picking, fiddling, and singing, among a few other bits I’m sure. He was born in 1937 so that makes him 75. Not ancient in todays world of age, but hey, he has been playing around all of his adult life, and causing many a kind of sensation from his songs, and his beliefs. Not one to be afraid to speak, or sing, up, he lays it down and plays it well. He is a legend, a country music legend.

“The word “legend” usually makes an appearance at some point when discussing Merle Haggard. It’s an acknowledgment of his artistry and his standing as “the poet of the common man.” It’s a tribute to his incredible commercial success and to the lasting mark he has made, not just on country music, but on American music as a whole.”

It felt like such a privilege to be there, in that room with him, with almost all of the audience screaming out, or punching the air with a hell yeah, or singing along. Me, I couldn’t sit still, so stood up in the back, dancing, crying, singing, and hell yeah’ing myself.

He still has it in him, no question about it. The entire band was tight and put on a great show. It was riveting, to be there, to see him. Live. Loving his music, the roads he walked with and because of his music, singing about his life, and others. Sharing his songs with the world for us to listen to and play. I play many Hag songs on my guitar, and love them!

What does it mean to be a legend? How does one become a legend? Standing up for your beliefs, being the best, making an impact, surrendering, being authentic, becoming an expert, tuning up your craft, walking your talk, doing what you love, and changing the world because of it.

Check out Scott Dinsmore’s sight for some thoughts about living your legend.

“The people who do work that matters, the Living Legends who impact the world, all have at least one trait in common. They push limits.”

“The biggest rewards will always involve pain to get there. The people who avoid the pain also manage to avoid the feelings and experiences that bridge the gap between average and extraordinary.”

I hope you do…live to the richest, the fullest, the happiest…right on…

Let me know what you think. Add to the list of legend makers.

And what do you think makes a person a legend?

← Wednesday Thoughts and Quotes
how to ride a bike →